Dawn Machell is the designer of ‘Springtime’ collection, that we have launched in 2018, but it’s always updated! We have had a chat with her. We talked about her work and also her experience in sewing. 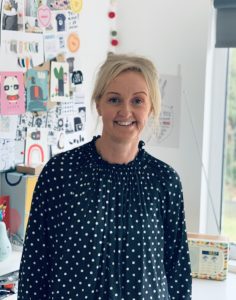 Hobbies: Drawing pictures, ha ha, work is my hobby! Also spending time with the family and travelling to warmer countries.

Ingela P Arrhenius (she’s an illustrator really, but I love her simple characters)

What made you enter the world of patterns?

I studied fashion design and worked as a children-wear designer, but it was always creating the patterns and placements that I preferred to actual garment design.

Where did you get inspiration for ‘Springtime‘ collection?

I draw pictures which I put on my blog and Instagram pages every week, they normally relate to whatever’s going on in my life. Then at the end of the month, I make them into a little pattern. That’s where this collection originally started!

Who taught you to?

My mum originally, then I studied fashion and learned to pattern-cut and developed my sewing skills at college.

Which kind of things do you usually sew and in which materials?

I have to say I don’t really sew much anymore! I used to make and sell children’s clothes and also clothes for myself and my friends. In 1996 my sister got married and I made her wedding dress and 5 bridesmaid dresses. It was such a massive job, that kind of put me off and I haven’t made any clothes since! I still sometimes sew appliqués – illustrations for child books but using sewing instead of drawing. 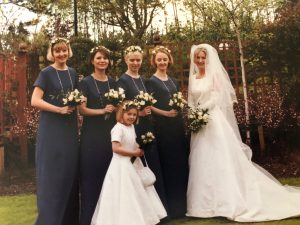 Which clothing parts and/or accessories would you like to sew with these fabrics collection, and with which patterns?

I keep meaning to make something with the collection. I think that as soon as I have time, I will make some toys. Cute characters in the fabric or cute plain characters wearing clothes in the fabric… that would be cool!

FREEBIE – fun in the park